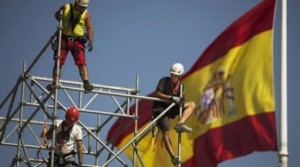 Spanish housing prices rose in the second quarter compared with the same period last year.It is the first year-on-year increase since 2008 and a sign that the country’s real-estate slump has finally run its course.
The upbeat data was issued on Monday as Spain’s finance minister gave a tentative projection of higher growth for the Spanish economy, which emerged a year ago from its second recession in five years.
Spain’s national statistics institute said second-quarter housing prices had increased 0.8% on the year, compared with a 1.6% drop in annual terms in the first quarter. On a quarterly basis housing prices rose 1.7% over their level during the first three months of the year, the institute said.
The increases can be read as the strongest signal yet that the collapse of real-estate prices that began in 2008 has levelled out, but not as evidence of a sustained recovery.
“What we see is a trend towards price stabilization,” said Beatriz Toribio, head of research at Fotocasa
Housing prices have declined 35% in Spain as a whole over the past six years. The economy has been gaining traction since it emerged from a nine-quarter-long recession in the second half of last year, triggering more appetite for Spanish assets such as property.

But Ms. Toribio said domestic demand for housing in Spain is still flimsy, as many would-be Spanish buyers lack jobs and cash reserves, and therefore wouldn’t qualify for mortgages.That leaves foreign investors leading the demand for housing and stronger price rebounds in areas where they focus their interest, she said. Those areas include central districts of Madrid and Barcelona and parts of the southern Mediterranean coast.
Spain’s economy was one of the best performers in the eurozone in the second quarter, as major trading partners including France and Italy registered slumps in output.
On Monday, Finance Minister Luis de Guindos said the government is planning to raise its 1.2% growth projection for the year and its 1.8% projections for 2015.
“Reality has surpassed our expectations,” Mr. De Guindos said in Madrid during the Organization for Economic Cooperation and Development’s presentation of its latest report on the Spanish economy.